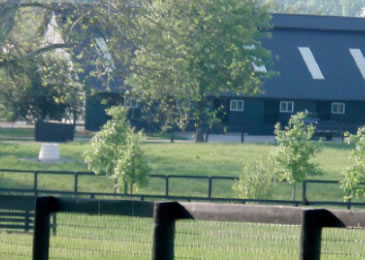 LEXINGTON, KENTUCKY IS THE HEADQUARTERS OF THOROUGHBRED RACING IN THE U.S. and is informally known as the “Horse Capital of the World”.

Many of the world’s leading owners and breeders have established farms in this “bluegrass region” of Kentucky. Keeneland Racecourse and Sales Company are located in Lexington.

Juddmonte Farms’ Lexington operation is located just south of the city, with yearling operations on Lemon’s Mill Road, and is approximately 10 miles from Blue Grass Airport. The farm consists of almost 2500 acres of land. The manager is Garrett O’Rourke.

We stand three stallions in Lexington: APTITUDE, EMPIRE MAKER –– both second in the Kentucky Derby –– and MIZZEN MAST.

Moreover, Newmarket in Suffolk England is the headquarters of British Racing. There are around 2000 racehorses in Newmarket spread between 66 racehorse trainers. The two racecourses and training facilities extend over 4500 acres and include 40 miles of turf gallops and 17 miles of all-weather tracks.

Juddmonte’s Newmarket operation is Banstead Manor Stud, which is situated on the outskirts of the village of Cheveley, some 4 miles south of Newmarket.

The stud comprises 373 acres of land, of which 50 are set aside for the stallion unit at Banstead. The Stud operates on the successful ‘walking-in’ system for visiting mares.

Juddmonte bred 30 individual Group/Stakes winners worldwide in 2006, including the Group/Grade One winners CACIQUE,LATENT HEAT, PASSAGE OF TIME, PRICE TAG and the Prix de l’Arc de Triomphe winner RAIL LINK. The last three mentioned are all by Juddmonte’s successful young stallion DANSILI, who was Champion sire in France in 2006. He is being joined at Banstead Manor in 2007 by his full brother CACIQUE.

HASILI, the dam of DANSILI, CACIQUE and of course BANKS HILL, INTERCONTINENTAL and HEAT HAZE, was named Broodmare of the Year by the Thoroughbred Breeders’ Association. HASILI becomes the second Juddmonte Broodmare to win this award, following on from SLIGHTLY DANGEROUS –– the dam of COMMANDER IN CHIEF, WARNING and YASHMAK. Juddmonte has also been awarded the TBA Silver Rose Bowl for the second time, which is a discretionary award presented to Breeder of The Year.

Juddmonte has now bred 68 individual Group/Grade One winners of 121 races.