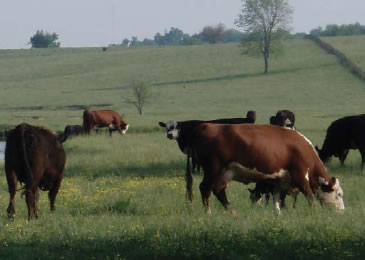 BROOKFIELD FARM, LOCATED ON TODDS ROAD AND CLEVELAND ROAD at the edge of eastern Fayette County and western Clark County is one of the most storied general agricultural operations in Kentucky. In 2000, much of the legendary Brookview Farms became Brookfield Farm, and the Gay family has been raising prized cattle and crops on Brookfield land since 1790. Simply stated, Brookfield exemplifies the renowned heritage of the Bluegrass.

The original parcels of Brookfield were received from the British Monarchy in the late 1700s. Over time, the operation grew and is now over 2,000 acres of prime bluegrass farmland. Throughout the mid 20th century, Brookfield was the largest cattle operation in the state of Kentucky. Brookfield has an unparalleled breeding history of purebred horned Herefords. From 1935 to 1987, J. Douglas Gay, Jr. bred and sold grand champion bulls and heifers of the famed Bacas and Domino bloodlines. These prized Herefords won top honors at state fairs and competitions throughout the United States.

Mr. Gay was not only an expert cattle breeder, but also a successful mechanical engineer, inventor, and businessman. In 1935, Mr. Gay developed the “Bluegrass Seed Stripper” that was an innovative, nine-foot bluegrass harvester. The stripper sacked 40 acres of bluegrass a day. Providing cleaner, quicker, and more complete stripping operations –– the Bluegrass Seed Stripper has been widely recognized as a key development in 20th century farm technology.

Although Brookfield is rich in history and tradition, it has a keen eye focused on the future. In the 1990s, the cattle market changed and buyers wanted a leaner type of beef. To remain at the top of the game, Brookfield changed its purebred Hereford operation to a “Black-Baldie” herd.

Generally 70% Angus and 30% Hereford, Black Baldies produce lean beef at high growth and maturation rates. Like the Herefords before them, Black Baldies thrive at Brookfield. Its rolling green pastures and fertile soils give rise to top quality corn, hay, and grasses that feed its cattle. As such, Brookfield Black Baldies can gain up to 3 pounds per day.

Under the ownership of Jack and Elizabeth Gay van Nagell, and expert management of Ben Roberts, Brookfield continues its pursuit of perfection. Today, the very best Hereford and Angus bloodlines are introduced into the herd using artificial insemination. Only the finest heifers are kept for breeding quality, while the steers are sold for beef via Internet auctions. After calving, Brookfield’s herd numbers nearly 1000 and is skillfully worked on horseback.

While Brookfield’s primary agricultural activity has been the breeding and raising of beef cattle, it has a substantial row-crop operation that includes the cultivation of soybeans, corn, and tobacco. Though Brookfield is grounded in 200 years of history, it looks forward to what the future holds- promises of simple excellence, and innovation.