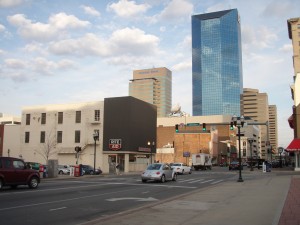 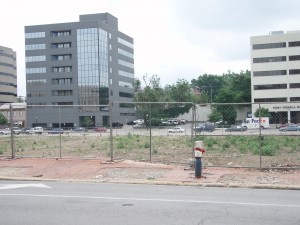 The purpose of the Courthouse Overlay zone is to encourage growth and infill redevelopment, while preserving and protecting the unique features and characteristics of the area surrounding the courthouses downtown.

The Courthouse Overlay Board, and if necessary the Planning Commission, achieves this goal by using applicable design standards and “authorization permit” requirements to approve or disapprove development proposals in the zone.

Despite this intent, current processallows applicants to demolish buildings and proceed with development activity BEFORE the Planning Commission hears, on appeal, a decision of the Courthouse Area Design Review Board. As such, the “meat” of an appeal can be torn-down, irreversibly altered, or displaced before a party to the action has his/her proverbial “second-bite at the apple”.

This unfortunate circumstance occurred during the recent CentrePointe controversy, in which the developer destroyed buildings on the Woolworth Block while community interests appealed the Courthouse Area Design Review Board’s ruling—which granted a demolition permit—to the Planning Commission.

In response to this wake-up call, the Planning Commission initiated and yesterday ADOPTED a text amendment to the zone, that prohibits the demolition, building, or issuance of other development permits prior to filing and/or completion of an appeal from the Courthouse Area Design Overlay Board to the Planning Commission.

The Fayette Alliance strongly supported this text amendment, and the Planning Commission recommended its adoption on June 25th, 2009.  The Council formally adopted it on July 7th, 2009 and it is now law.