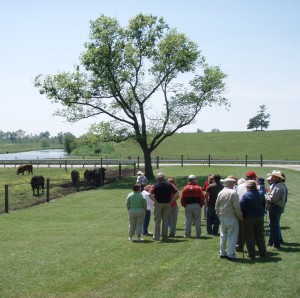 In 2010 according to the USDA, Fayette County had farm sales of $504.1 million and was ranked the number one agricultural county in Kentucky.  Fayette (one of 120 counties in Kentucky) achieved 10.4% of all agricultural farm sales in the state.[1] The significance of this booming industry lies not just in the direct industry but also in the multitude of visitors who come to our region specifically to witness our unique agricultural heritage.

According to the The Lane Report’s Prep Magazine the economic impact of tourism in Kentucky was $11.3 billion in 2010, an increase of 4.8 percent from 2009. State and local tax revenues from this booming industry topped off at over $1.18 billion the same year.  Additionally, tourism was responsible for 169,258 of the jobs in Kentucky in 2010, an increase of 2,657 from the year before.[2] The Kentucky Horse Park is home to 35 national equine associations, which contribute $260 million to the local economy. Tourism creates a major financial boost to air and ground travel, hospitality, food service, local attractions and retail businesses.[3]

More than 1 million people come each year to experience our rural heritage.

Agritourism attracts visitors to Central Kentucky’s equine venues (Keeneland Racing, Kentucky Horse Park, Thoroughbred horse farms and related equine events).  In 2011 825,000 visitors made their way through the Kentucky Horse Park—investing needed money in our hotels, restaurants, and local businesses.[4] At the 2010 Alltech FEI World Equestrian Games more than 500,000 visited the Kentucky Horse Park over the course of 15 days. The economic impact of this tremendous event was found to be nearly $400 million, significantly higher than the predicted $201 million impact.[5]

Agritourism is a growing industry, bringing a wealth of economic benefits to our region.

The economic value of ag-tourism is not limited to the 2010 World Equestrian Games.  In November 2011, John Nicholson, director of the Kentucky Horse Park, estimated that the economic impact of equestrian events at the park to be $44.2 million this past year. This can be largely attributed to the addition of 14 new equestrian events at the Horse Park in 2011.[6] As the number of visitors traveling to see our unique landscape has continued to grow, so has the importance of protecting our signature Bluegrass landscape. It’s not just about preserving a “scenic view shed,” but also about preserving a major agricultural attraction that brings visitors from far and wide to our region.