House Bill 282 did not make it out of committee during the 2014 legislative session. However, it General Assembly might take it back up in the 2015 session. We’ll keep you updated of any new developments here at fayettealliance.com 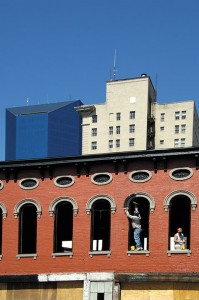 The Kentucky State Legislature is currently considering House Bill 282, which will expand the scope of projects eligible for $20 million in incentives under the KY Investment Act (Act). Specifically, the scope will be expanded to include mixed-use and residential infill development that is located in central business districts and low income census tracts.

This bill will enable infill redevelopment inside our urban core without impacting the Kentucky’s fiscal budget, since the bill increases the scope, not the amount, of incentives generated by sales-tax revenue under the Act.

Fayette Alliance supports HB 282 as it furthers a key pillar of our mission—infill redevelopment and sustainable growth. By facilitating growth and reducing sprawl at no added cost to the state, this strategy is a win-win for both the city of Lexington and the Commonwealth of Kentucky. Therefore, we join Lexington Fayette Urban County Government, the League of Cities, Commerce Lexington, and others in urging its adoption.