Currently this issue is in the Planning Committee of the Council, and we hope that the Committee will move it forward to the full Council for consideration and approval in June 2015. 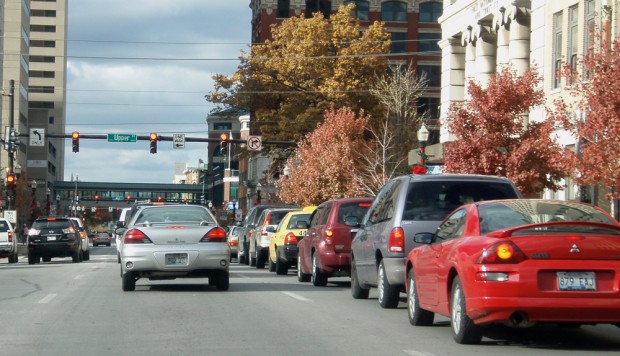 Beginning in 2012, Stantec Engineering spearheaded the effort to  assess the impacts of converting downtown’s “one-way” streets to “two-way” arterials. Using traffic studies, operational considerations, and public feedback, the report is an important step in assessing this complex, yet pivotal planning issue for the city of Lexington.

Originally, all downtown streets were two-way and were converted to one-way beginning in the 1950’s, to move traffic—and specifically people, goods, and general commerce—from our urban core as efficiently as possible.

Growing outward created new markets and benefits to the community…but it came at a price that we are addressing today.

Over time, downtown and older neighborhoods suffered from depressed property values, reduced economic activity, social imparity, and diminished quality of life. We also lost Bluegrass farmland at an alarming rate, leading to a World Monument Fund designation for Lexington and the inner Bluegrass region in 2006. As we grew, new carbon footprint and water infrastructure challenges also surfaced throughout the community, confronting Lexington in unprecedented ways.

Once again, the question of two-way streets has an important role in Lexington’s future. As demonstrated by countless cities all over the nation and world, the prevalence of two-way streets makes downtown a more attractive place to live, work, and invest.

When feasibly constructed, two-way streets can unlock the economic potential of downtown, creating an urban core that can anchor infill redevelopment, and in turn farmland preservation efforts in Lexington. This hand-in-glove- strategy is both acknowledged and recommended by the 2006 Downtown Master Plan, the 2007 and 2013 Comprehensive Plans, and Destination 2040.

Therefore, pursuant to our local planning authorities and community’s vision, Fayette Alliance supports the recommendations of the Downtown Lexington Traffic Movement and Revitalization Study. They are summarized below, and please see the full report for additional details:

To learn more about this issue read our position statement: