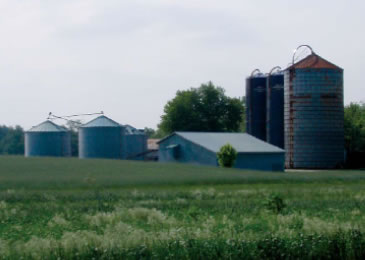 IN 1842, BOB JAMES’S GREAT-GREAT GRANDFATHER, JOHN GRAVES JAMES, purchased Walnut Lawn Farm, which lies along Military Pike in the southwest corner of Fayette County and has acreage in a portion of Jessamine County. Since then, Walnut Lawn Farm has been continuously farmed by the James Family. Bob is the fifth generation to live there and farm the land, with two sons coming on as the sixth generation. Bob, his wife Leslie, and his sons Robert and John, live in the old family residence that was built in 1893. An 18th century house was torn down to build the “modern” Victorian house, but many of the old 18th century outbuildings still stand, including a weaving house, an old kitchen, a dairy, an ice-house, and barns built in the early to mid 19th century. The original old sunken pioneer road passes close by the house, and has now become a farm lane. Another residence on the farm, a Palladian style house, was built by Bob’s father in the 1960’s and was designed by the famous architect, McMeekin. Below this house lie the cattle feeding operation buildings, no longer used for what they were intended, but for storage of equipment. Bob’s father, Robert C. James, fed about 500 head of cattle and that operation continued for about 20 years. In 1980 they ceased that operation to concentrate on grain crops.

In the beginning Walnut Lawn’s crops and livestock included about everything, such as cattle, hogs, sheep, poultry, wheat, and corn. Shorthorn cattle were raised in the late 1800’s and early 1900’s to send out West to replace the Longhorn cattle. Hemp was grown until about 1940 when it was made illegal and area farmers were encouraged to grow more Burley tobacco. Bluegrass seed was also grown and marketed by Bob’s grandfather, Robert Lee James. Currently, about 400 acres are farmed. Crops are tobacco, corn, wheat, rye, soybeans, and a small cow/calf herd. Both Bob’s father and grandfather were innovators in their day for better farming practices. Bob follows in their footsteps by using the no-till method on all of his crops, including tobacco. This protects fields from compaction and soil erosion, and promotes wildlife protection during nesting and wintering.

The James Family strongly believes in the preservation of Bluegrass farmland. All of Walnut Lawn’s Fayette County acreage has been put into the Purchase of Development Rights Program. Family members have lobbied for farm causes at many City Council meetings and at the state and national level with the hope of saving America’s family farms, and preserving all of the Bluegrass land that is a non-replaceable treasure in the landscape of America.