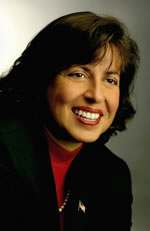 As Lexington mayor from Jan., 2003 through Dec., 2006, Teresa Isaac presided over measures that previously had been stalled by controversy: Enactment of an indoor smoking ban; increased pay for police and firefighters; budget cuts to every other area of government, including significant cuts to her own office budget.   Isaac led the city through the 2003 ice storm where more than 90,000 residents were without power.  She received kudos for her compassion, hard work and leadership. During her administration the Purchase of Development Rights Program experienced exponential growth.  There were 4,276 acres on 26 farms when her administration began.  After four years of her leadership, the program had grown to 17,247 acres on 150 farms.  Isaac treated the PDR program as an economic development tool to protect Fayette County’s agriculture, equine and agritourism industries, and as such, the PDR program reported directly to the city’s CAO.  The PDR program’s success led the American Farmland Trust to hold their 2004 national conference in Lexington.  In 2006, with the Kentucky Thoroughbred Association sponsoring, Isaac delivered the good news of her State of the Merged Government Address to a capacity crowd. During Isaac’s administration, Mercer Human Resource rated Lexington  #1, tied with five other “Safest Cities” in the U.S., in 2005.  Forbes Magazine recognized Lexington as the 14th “Most Livable City” in the country in 2003.   In 2006, the Sierra Club designated Lexington a “Cool City,” recognizing steps taken to reduce global warming, and the Green Guide named Lexington the 12th Greenest City in the US.